Celebrating the Feast of All Saints’ and All Souls’

There is little known evidence that allows us to trace the origins of the celebration of All Saints’ Day and All Souls’ Day; however, when Christianity was finally legalized in 313 A.D. during the reign of Constantine, it was then that the commemoration of the saints, and particularly the martyrs, became a common practice.

In the East, both St. Ephrem (d. 373) and St. John Chrysostom (d. 407) have been recorded as mentioning this feast in their preaching. In the West, this celebration became an annual feast on the first Sunday after Pentecost. The primary reason for later establishing a regular feast day was due mainly to the desire to honor the great number of martyrs who gave their lives for the faith during the persecution of Emperor Diocletian (284–305 A.D.), which is recorded as the worst persecution of Christians in history. As regards to the exact date of the feast, it wasn’t until the papacy of Gregory IV (1073-85) that the date of November 1 was designated as the official liturgical feast and later began appearing in the ninth and tenth century sacramentaries (the books used by priests containing the prayers of the Mass).

Many today have come to believe there to be a pagan connection to the feast of All Saints’, and though there may be some truth to that claim, the feast was established independently of any pagan influence. Along with the feast of All Saints’ the celebration of All Souls’ Day was established. The church has always encouraged the offering of prayers and Mass for the faithful departed in Purgatory, and has seen it as an opportunity to employ the prayers of the faithful on Earth to help usher these souls to their eternal reward – the Beatific Vision, the glorious vision of God.

Throughout the ages, other customs have developed surrounding the feast of All Souls’, including in countries like Mexico where the relatives of the departed make garland wreaths and place paper flowers on the grave of the deceased on the morning of All Souls’. Families typically spend the entire day at the cemetery, where Mass is offered and special prayers and blessings are said over the graves of loved ones. This day is known as “Dia de los Muertos”, or Day of the Dead, and has been upheld as part of Mexico’s sacred tradition.

The feast of All Saints’ this year falls on a Saturday, and therefore the obligation for the faithful to attend Mass has been abrogated, though we still encourage anyone who can to attend Mass at their parish on this solemn day.

Mass Schedule for the feast of All Souls’ is as follows: 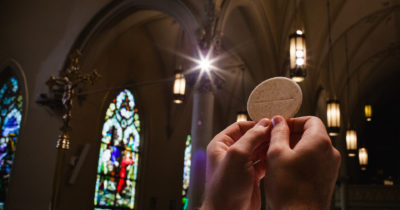