Kentucky parishioners ride out tornado in church praying the rosary

Jenny and Bill Rush and other parishioners at Sts. Peter and Paul Church In Hopkinsville, Kentucky, were nearly finished praying the rosary after an early morning Mass on New Year’s Day when an isolated tornado shook the church, much to their surprise.

As the storm roared, the group prayed all the louder, Jenny told Catholic News Service Jan. 3.

“We kept praying even though the lights were flickering,” she said. “It was exhilarating and terrifying, but at the same token it was spiritually uplifting to realize that even as we were praying the ‘Memorare’ she (Mary) was holding us. I honestly believe she was holding us.”

Bill watched what parishioners describe as the “great window,” expecting it to break “because the storm was so loud.” It survived intact.

The storm passed in minutes. Except for a downed tree, a few missing shingles and minor water damage to another building, the church escaped serious harm, Father Richard Meredith, pastor, said in an email.

He described the storm as “roaring like a freight train and the church booming like a drum.”

“Lights went out and it passed in under two minutes,” the priest wrote, adding that the cleanup in the downtown area and the east side of the city of 31,000 where the storm struck was continuing. No injuries were reported.

National Weather Service meteorologists toured the storm’s path to survey damage with Randy Graham, Christian County emergency management director afterward. Meteorologist Christine Wielgos told WHOP Radio that based on the damage, the twister generated maximum winds of 115 miles an hour and stayed on the ground for about a mile.

The National Weather Service said six other tornadoes struck western Kentucky communities Jan. 1. On Dec. 10, 2021, tornadoes raked the western portion of the state, with one storm causing catastrophic damage and dozens of deaths and injuries along a 200-mile path. 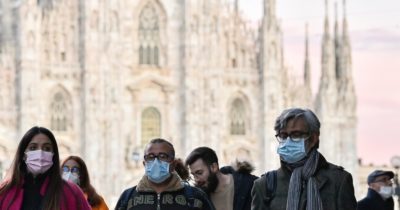 Wearing a mask at Mass is a small sacrifice pleasing to God, priest says